You are here: Home1 / Why choose Theraposture?2 / Customer Testimonials

A few examples of some of the many letters of appreciation that we receive:

“Prior to getting our Theraposture Rotoflex bed, Carol used to have a lot of pillows around her just to get comfy and then she’d be stuck in the same position. Her legs were badly swollen because the fluid wasn’t draining away and as her MS has progressively got worse, the only way Carol could get into bed or move in the night was with my help. We looked on the internet and found the Theraposture Rotoflex bed; we’d not come across anything like it, especially as it isn’t clinical and we wanted our home to still feel like a home.”

They chose a Theraposture Double Combination bed with two independent mattresses surrounded by faux leather. The variable height, profiling and rotating mechanism on Carol’s side of the bed moves her from a lying to an upright seated position. Once seated with her feet comfortably positioned on the floor Carol can also raise the Rotoflex so standing up or sitting down is safer and requires less effort. 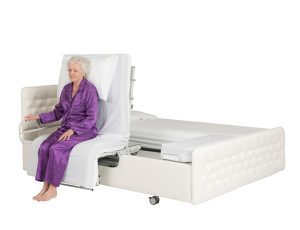 Rotoflex image for product reference only

“It’s the rotating action that swings her round into bed with the touch of a button that’s the key for us. This makes a real difference because it lifts up her legs without my help and carefully rotates her into place allowing her to move into bed independently. Plus, the profiling system lets Carol re-position herself at any time, meaning I can get some rest too. It’s so easy for her to use and she can also adjust the height if she requires it.”

It’s not just the Parkers who have seen the difference it has made. Barry adds:

“After only a week we noticed the oedema in Carol’s legs was less significant and her Physiotherapist has remarked on these changes as well.”

“I would like to officially commend the work and actions of two of your employees. Peter Wicks and Richard McCracken two of your company reps who (in my opinion); have gone the extra mile to help both a family and myself. Peter’s prompt replies and meticulous work to help organise a cot for a little boy and then Peter and Richard taking the time to set up a loan cot.”

This has resulted in the little boy sleeping really well for the first time in ages and the family having a very upsetting episode come to a positive conclusion. They liaised with the family and their customer care was exemplary. This action impressed me greatly and it is heartwarming to think that people do still help others out when in need on a practical level when an opportunity presents.

Their competency has also helped me greatly in terms of less stress, in that I have not had to double check everything over and I have been reassured that your company will deliver what it says.

Their actions have been noted by myself and I have also advised my managers who have since made decisions on which company they would choose to order from in future.

Theraposture has been reliable but it has delivered much more than just the equipment ordered on this occasion.

“When core muscle tone is reduced or the lifting of legs into bed is impacting a client’s independence, the Rotoflex electrically operated 90 degree turning bed enables independence to be achieved. As an OT I have worked with a significant number of clients who experience difficulties with bed transfers, & I am confident that the Rotoflex is the most appropriate intervention available in meeting their needs and allowing participation in activities of daily living.”

“In the complex new world where we find ourselves working to support high needs in the community, I was really pleased to be able to move forwards on assessing needs and agreeing a safe product for my client who is being shielded at present. This was achieved by us agreeing a basic specification of need, a video call from a Theraposture equipment expert to the client’s mother/home and then by means of us tying up the details of the brief in a follow-up call.

I welcome Theraposture’s willingness to find innovative ways of offering continuity of service at this complicated time and look forward to future virtual visits as a safe way of offering input to the most vulnerable of clients by removing avoidable delays through the use of remote technology to maintain distance.”

“My 93 year old aunt who lives in a residential home in Liverpool, bought one of your adjustable chairs two years ago and has been highly delighted with her purchase, so much so that she is totally dependent on it.”

“I write on behalf of all the staff and patients on ward 2, Warminster hospital to express our gratitude for all the help given by ‘Theraposture’ in producing a riser/recliner chair to meet the particular needs of a varied patient group. We are also most grateful for the speedy delivery once the order had been placed. Your chair has already proved invaluable and is used every day enhancing the care of a number of different patients.”

“Thank you for your wonderful service. The cot bed used by my son has changed our lives. The professional and caring approach from all of your staff is to be commended. I was amazed at the detail in which the assessment was conducted and it was very useful to have the chance to see the actual cot bed and to let Stephen try it first. Thank you all for all of your help.”

“Please pass our thanks and appreciation to all of your staff for the professional and caring approach when dealing with my elderly father’s chair. Your company was the only one to be able to make the chair that he needed. The removable arms are a fantastic solution to his problems and the cost of the chair was much lower than we expected for such a good quality bespoke item. Well done Theraposture!”

“We have recently purchased one of your Theraposture adjustable beds and feel that we must now express our complete satisfaction with both the bed and with our dealings with your company from the initial approach to you, after seeing it advertised in Arthritis News, to the completion of installation. My wife is severely disabled with Rheumatoid Arthritis and has had several joint replacements but now finds that the Theraposture bed has proved very comfortable and has solved the problems experienced with a normal type bed. We were very impressed by your Representative at our first appointment and felt that he explained the working and benefits of the bed very well and was very understanding of the problems of my wife’s disability needs. We felt, after his visit, that we had made the right decision in contacting your company and subsequent visits by your Representative have confirmed our first impressions. You might say he came as a stranger and left as a friend.”